Canals Across the City

The expanses of green lawns and numerous golf courses in Arizona's cities require tremendous amounts of water to maintain them. Originally built to supply water to agricultural operations, much of the water that now flows through the many canals that criss cross the Phoenix metropolitan area, goes towards urban uses. Canals also carry water to municipal treatment plants for distribution as drinking water. These man made oases provide some pleasant opportunities for recreation and nature observation. The banks are often paved or of hard packed dirt that permit easy walking, jogging or bicycling. Popular stretches of the Arizona Canal and Indian Bend will attract hundreds of outdoor enthusiasts on pleasant weekends during the cooler seasons. Come summer, the heat keeps most people away, but there tends to be a bit more to see, as far as birds and other wildlife.

Some of the nicest canal sections to tour are the Arizona Canal from Cortez Park at 35th Ave. and Dunlap east to 44th St., Indian Bend from Cactus and 40th St. south to Indian School Rd., and the Grand Canal from 23rd Ave. and Indian School Rd. east and south to Papago Park. These canals have a long history that stretches back to way before even the Spanish explorers arrived. The prehistoric Hohokam built them before 1200 AD, but the culture had vanished before the Spanish arrival so that no written record exists. Pueblo Grande Museum, located near 48th Street and Washington in Phoenix offers an excellent portal into this vanished civilization. 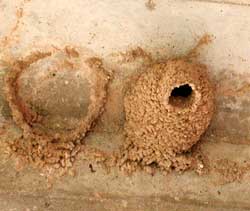 Birds are abundant along the banks and flying overhead. Highly aerodynamic birds that swoop and swerve then dive and bank but rarely perch are Cliff Swallows. They nest beneath bridges over the water, preferring the quieter ones as at the 14th Street bridge. Their nests (shown above) of mud and grass blades are affixed to vertical or even downward-facing surfaces. Many nests may be grouped close together with dozens of birds coming and going all day long when they are feeding young. Food is taken mid-air; mayflies, midges and mosquitoes being favorites. These birds head south to the tropics in the fall, and return each spring. These are the same species that return to San Juan Capistrano, CA each year.

At dawn there will be dancing swarms of mayflies, of faint gossamer and barely a centimeter long. Dozens of the insects gather together with each flying in an up-down pattern above the same spot. To view them best have a dark background ahead of you and hold your hand up to block the direct sun from glaring into your eyes. These swarms are entirely males. A willing female enters the dance-swarm and a pairing is quickly made. Eggs are immediately laid in the canal water and usually the adults die within 24 hours of having emerged from their watery realm. The eggs hatch into aquatic nymphs where they feed on microscopic detritus in the water for several months before maturing.

The Black Phoebe is a very entertaining bird to watch. It is mostly black with a white belly. It perches on a rock, fence post or stick from which it sallies out to catch a flying insect on the wing, then U-turns right back to its perch. It may relocate if the hunting success drops off or if it is disturbed by a passerby. These birds also build nests of mud and twigs but need a slight ledge to set it upon. Another of my favorites is the Killdeer. These sharply marked shore birds glean for bugs and spiders at the water's edge but are also at home on large areas of turf. They make full use of football fields during the hot summer months when the kids are away. Flood irrigation floats up a bonanza of insect prey on a regular basis.

Along the fences and side canal banks are two kinds of trees that often volunteer. One is the Mesquite. It has dark deeply furrowed bark and feathery compound leaves. Where branckes have been broken or cut mesquites often ooze a black gooey sap. Spikes of yellow flowers come in April and there are mesquite bean pods by June.

The most common wild-growing tree along the canal as elsewhere in the city environment is the Mexican Palo Verde or Parkinsonia aculeata. Mexican Palo Verde also goes by the name Jerusulem Thorn. The leaves are long grass-like stems (petioles) that may have dozens of minute leaflets when young. Parkinsonia gives a burst of yellow flowers in late April, but then unlike the other palo verdes, blooms sporadically through the summer months. The flowers are a favorite of the all black Carpenter Bees. There is a grand Aleppo Pine growing near the canal west of 16th Street. But because it is an exotic species, originally from the Middle East, there are few insects munching the leaves and twigs (they are still in the Middle East!), and so there is little reason for birds to live and forage in this tree. Google Images of Aleppo Pine.

This stretch of Indian Bend Wash in Scottsdale holds some attractive ponds that are used by water birds and dragonflies. Residents can stroll and bike along these waterways with little thought of being in a desert. In the winter months the ponds are used by many northern duck and goose species. Occasionally some rather rare birds show up, so it's a good idea to pack the binoculars. I counted seventeen kinds on June 18th: