This desert city has a love affair with water. Green golf courses and lots of mini-lakes and ponds. Lush green lawns and warm sunny weather attract winter tourists from all around the Northern Hemisphere ("snow birds"). But, the ponds also offer habitat for hundreds of real birds many of which migrate long distances from the northern United States and Canada.

On November 18, 2000 the Maricopa Audubon Society sponsored a field trip led by Tara to some of the best birding spots. The first stop was a pond and golf course at the Holiday Inn Sun Spree Resort on Indian Bend Rd. just east of Scottsdale Rd. Obtain permission from the hotel first or else be their guest before walking about the pond and course. Here we spotted many ducks, herons and shorebirds, including the spectacular Black Necked Stilt (tall black and white bird with red legs) as well as flocks of spritely American Pipits. An American Kestrel, a type of bird-eating falcon, kept the many smaller birds wary.

Our next stop took us to the Chart House restaurant on McCormick Parkway and Scottsdale Rd. Several ponds straddle the parkway and play host to many semi-domesticated ducks and geese as well as the winter migrants. We saw a Great Blue Heron, lots of American Coots (black, ducklike birds with white bill), and Ruddy Ducks (stubby ducks with a short tail that is held straight up).

Our third stop was Buster's Restaurant, northwest corner of Hayden Rd. and Via de Ventura. Just north of the restaurant / shopping center are ponds and a long paved bikeway. There were lots of ducks, especially American Wigeons which have heads marked with gray, green and white. In with the Americans was a lone Eurasian Wigeon (head is mostly rusty brown with white), a stray that might have wandered from as far away as Siberia or Greenland! It will be happy to spend the winter here with the Americans so long as it's sunny and warm and there are plenty of water plants to eat. In addition there were insect-eating Phoebes and Warblers at water's edge taking the flying midges (small, non-biting, mosquito-like insects) that had emerged from the water. Shore birds poked into the mud at the pond's edge in search of worms and insect larvae. 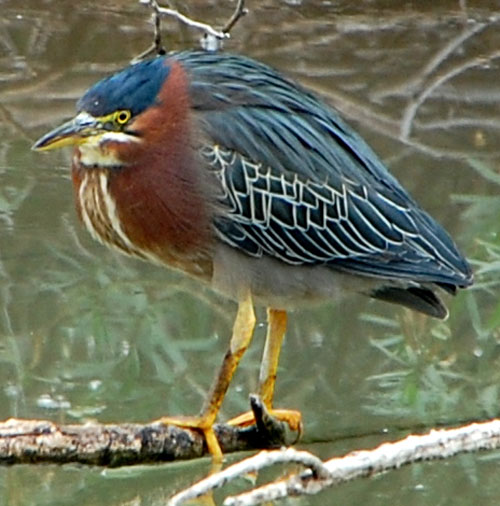 A Green-backed Heron,
with utmost concentration,
takes aim at an underwater target ...
probably a small fish.

On Dec 1st, 2013, we visited these ponds again and added two more species: a Brown Creeper was looking for insects on the trunks of the big cottonwoods that grow along Lake Margarite and several squawking lovebirds flew overhead. On this date we watched an American Kestrel glide into one of the cottonwoods and emerge with a big green katydid. Katydids avoid predation by closely resembling a leaf. But this time the falcon's sharp eyesight betrayed the camouflage and the katydid became lunch.