Wildflowers in the Sonoran Desert of Arizona, USA

July 23rd, 2020: Agua Fria National Monument. Most of the Sonoran Desert has passed 100 days without measurable rain. You would imagine that finding anything green, let alone open flowers, would be difficult. That is unless you found riparian habitat where water flows most of the year. Ripaian zones are also a survival necessity for desert birds and mammals.

Feb 28th, 2020: Lake Mittry - on the nearby rocky hills. Once one travels away from the irrigated gardens and farms of Yuma and the Colorado River the desert vegetation becomes very sparse and the first impression is lots of barren rock and hills. Only the washes have greenery that persists. With recent rains, however, tiny plants many less than 5 cm emerge and bloom quickly. Scores and scores will suddenly appear if the naturalist gets down on hands and knees and looks closely!

Feb 16th, 2020: Estrella Mountain Park is in the southwest portion of metropolitan Phoenix. Wildflowers are still green holding onto the moisture that came in Dec. 2019. It's a bit early and the soil is definately drying out. However, there were plenty of spring flowers to see.

Nov 7th, 2018: Crazy! Usually a search for wildflowers in November is a fruitless task. However, this past October was the wettest ever recorded in the Sonoran Desert and so things are very different this year. What's blooming is really confusing. Among the wildflowers showing now are those normally seen blooming in spring and others that normally bloom in summer or autumn. Blooming ought to continue until frosty weather arrives. There were dozens of species blooming along the Apache Trail east of Phoenix.

Apr. 29th, 2018: Many desert perennials are blooming now. Some palo verdes are still showing clouds of yellow and cactus are also showing. These plants can store moisture from rains past and so bloom in spite of our extended drought. These were seen along the road to Seven Springs north of Carefree, Arizona.

Apr. 1st, 2018: I went searching for moisture and wildflowers high into the mountains east of Phoenix, near Slate Creek Divide, the high point along SR-87 to Payson. Immediately adjacent to the SR-87 roadway the usual spring perennials were blooming upon smaller,sparser bushes. Dusty conditions prevailed almost everywhere. Finding just one at a time through the day's search I finally found some interesting blooms.

Feb. 14th, 2018: This winter season has been among the driest and warmest on record. As a result wildflowers will be almost entirely absent this spring. The seeds of past seasons' wildflowers will remain dormant in the soil. Come a future year with better rains they will finally germinate and grow. Later in the spring perennials like cacti and shrubs will bloom, but with many fewer flowers. Today's rainfall (< 15mm for most of the Sonoran Desert) will be enough to keep them alive, but not enough for any significant growth or flowering.

Oct. 9th, 2017: More than a month without rain and temperatures above 40°C have left most corners of the Sonoran Desert wilted and brown. Members of the Arizona Native Plant Society searching along riparian habitats at Mesquite Wash northeast of Phoenix located more than a dozen plants still in bloom!

July 30th, 2017: Summer rains in the desert bring out fewer wildflowers than those of winter. Then there is heat, harsh sun, biting insects and active snakes. Nonetheless, intrepid nature lovers will find much of interest. Summmer rains can be very spotty so use the greening of Ocotillo to guide you to productive areas.

May 14th, 2017: Spring wildflowers are followed by the seeds and fruit which are often just as amazing and beautiful to behold. A drive out Bartlet Dam Road north of Scottsdale revealed more than a dozen flowers still blooming, but here are some of the fruits I found: 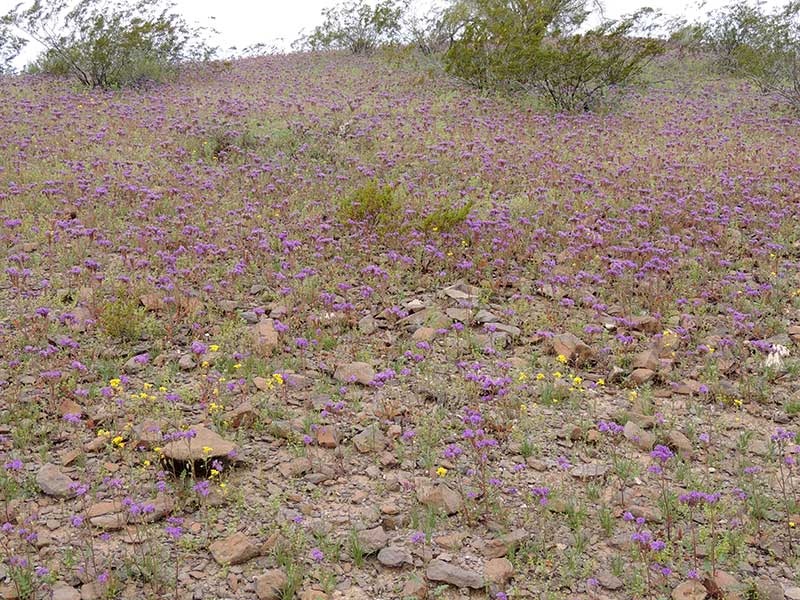 Mar. 5th, 2017: A drive out Agua Caliente Road southwest of Phoenix revealed a landscape blanketed with blooming wildflowers! Nearly every direction west, north and east from the metro area is likely to be similarly colorful. Many of the flowers in the above photo are Notch-leaved Phacelia.

Mar. 1st, 2017: Four significant rain events have passed through the Sonoran Desert this winter season and some areas have gotten a lot of rain. As a result Banner-Year Wildflowers can be expected at many locations, particularly north and east of Phoenix. These areas are higher elevation so the peak flower season may begin in a week or two and last through the end of April. At McDowell Mountain Park in Maricopa County most blooming plants are pretty small, but a field trip there by Arizona Native Plant Society located 37 species in flower.

Feb. 3nd, 2017: At Organ Pipe Cactus National Monument the ocotillo have leafed out as have the bursages. The saguaros have taken up a lot of water, but have not swollen to their maximum storage. Below the soil surface just a small amount of moisture remains from the modest precipitation events of the past six weeks. As a result annuals are sparse and much smaller than usual. There will be more annual flowers in the coming weeks, but it won't be a big show unless there is another major rain. Perennial shrubs and cacti should begin blooming well from mid March or so regardless. The best rains in Arizona occurred north and east of the Phoenix area where cooler temperatures will push the flowering to commence in earnest in about two weeks.

Jan. 22nd, 2017: Beginning in the last week of Dec. 2016 through at least Jan. 23rd many areas of the Sonoran Desert have benefited from a series of wet Pacific weather systems. Already the washes and normally dry hills have been converted to a carpet of green - germinating annuals and revived perennials. 2017 is shaping up to be a superb year for wildflowers. By mid to late February abundant color should become widespread. For now just the earliest blooming species are showing color.